As a proud member of the shipbuilding industry we continually strive to provide quality ships to our valued clients.
Our first objective as a small shipyard is to build our ships with great enthusiasm and skill in order to be the top preferred shipbuilder for our current and future clients.
Secondly we aim to be the safest shipyard possible by making sure everyone is alert ensuring no accidents occur.
Thirdly we promote a healthy and bright working environment for staff by cultivating teamwork and communication.
We only live once so we wish that everyone associated with Honda Heavy Industries can be proud to say they were involved in producing ships of the highest quality during their lifetime.

Things have value only because they can be transported. The world has developed in abundance by goods, people and civilized culture being transported across rivers, lakes and then seas on ships since ancient times. Needless to say, ships are especially important to Japan where we are surrounded on all sides by the sea. This sea is vast, but it is only a very thin film from the perspective of the earth. All of Japan is surrounded by the sea; this balance that connects us to the world is a miracle.

We have continued to build ships in Saiki, which thrives with a shipbuilding industry that leads the nation in this scenic environment, for nearly a century since our founding in 1924. Ship launching ceremonies impress everyone. This is when the giant body of a ship begins to move majestically and dynamically slips out onto the surface of the sea with a spray from its static position. It is a pleasure like no other to be praised by our customers who say that our ships are robust and sail well.

The maritime industry is in the midst of difficulties at the moment. Nevertheless, we will continue to strive to build good ships and be prepared to face this difficult situation. The image of shipbuilding is one of an old industry. However, the environment the world is grappling with is an unavoidable problem and also has a great impact on the world of ships. This is a great opportunity.

We will take advantage of our advanced information gathering powers as a broker channel in our office in Tokyo to take on the challenge of making ships that meet the expectations of everyone in society and also the latest ships for the next generation. 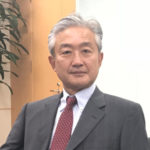